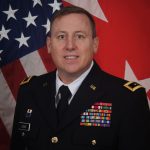 His responsibilities as the Director of the State Department of Defense include overseeing the training and readiness of 5,500 Soldiers and Airmen of the Hawaiʻi National Guard. He is the Director of the Office of Homeland Security, and the Homeland Security Adviser to the Governor. The State Department of Defense runs the Hawaiʻi National Guard Youth Challenge Academy and provides direct support to the Office of Veterans Services, an attached agency.

Hawaiʻi Revised Statutes, Chapter 127A-3 Emergency Management outlines the Director’s duties, which include:

Commissioned in 1984, General Logan has over 36 years of service, and has served in significant positions of authority and responsibility through his military career. View his military biography here. 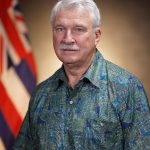 A graduate of the U.S. Naval Academy, Travis’s naval career spanned over 30 years, including service as Commanding Officer of the USS New York City, Commander of Submarine Squadron Eleven, and Chief of Staff and Deputy Commander of Carrier Group Eight. He also served as Director of Navy Modeling and Simulation, and Director of the Maritime Battle Center.

Following his retirement from the U.S. Navy, Travis worked as an Assistant Director at the Joint Advanced Warfighting Program at the Institute for Defense Analyses, and most recently as the Studies Director, Joint Center for Operational Analysis, U.S. Joint Staff.

A former national security analyst, Travis was and editor and contributing author of foundational studies on Operation Iraqi Freedom and the U.S. Government response to Hurricane Katrina.

Travis most recently resided in Tucson, Arizona, but has previous ties to Hawaii, having lived in Kapoho on the Island of Hawaii from 2011 to 2016.  He also served on various submarines at Pearl Harbor from 1977 to 1991.